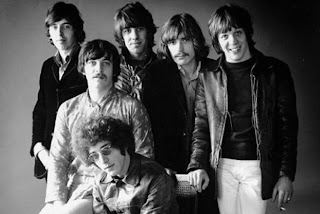 As 1966 was staring 1967 in the face, and boys were about to become men, the moustache became a ubiquitous symbol of maturity and musical depth. Briefly sported by Eric Clapton, then neatly lifted by The Beatles, a dormouse on one's boat was de rigueur. And as marijuana replaced light ale and Beat begat Rock, R&B combo of distinction The Paramounts morphed into the much moustachioed Procol Harum.

Having spurned an offer to join The Spencer Davis Group (to replace the departing Stevie Winwood), ex-Paramounts singer and pianist Gary Brooker hooked up with wigged-out wordsmith Keith Reid, borrowed from Bach and created A Whiter Shade Of Pale. The song has served its creators well, as in: Brooker enters his local. Barman enquires: 'What game are you in then Mr Brooker?' Brooker replies: 'I wrote a song.'

Procol (to you), recorded 10 original LPs in the decade commencing 1967, and an eleventh after re-forming in 1991. Despite significant sales in the USA and mainland Europe, the group was never really embraced as an 'albums act' in their homeland. Perhaps it was the enormity of The Hit, perhaps it was the moustache, perhaps Procol Harum were simply too good. Admittedly their catalogue is erratic, with the odd musical dead end, but it's also dotted with records of outstanding natural beauty.

Procol Harum (1968)
Issued in the USA as A Whiter Shade Of Pale, the group's hastily-recorded debut contains the early fruits of the Brooker / Reid collaboration, including the original studio version of Conquistador, later a hit in live form. At the time, a quite unique sound.

Shine On Brightly (1968)
In his sleeve-note for the group's second album, noted US critic and founder of Crawdaddy magazine Paul Williams wrote: 'Have you noticed how much the first Procol album (which was so influenced by Blonde On Blonde) influenced Music From Big Pink?' Well ... Williams has a point. Like The Band, Procol came from the R&B tradition, strongly influenced by Ray Charles and Bobby Bland. Both groups' sound was founded on a bedrock of piano and organ, and Procol lyricist Reid had certainly caught the 'mid-period Dylan' bug. Although encumbered by the weighty In Held 'Twas In I song cycle, occupying much of side two, Shine On Brightly is a wonderfully entertaining record, with Matthew Fisher's organ sound well to the fore and Robin Trower's heavy-blues guitar at its most potent. High points: Quite Rightly So, Shine On Brightly, Rambling On.

A Salty Dog (1969)
Much more of a 'group effort', Fisher and Trower now contributing heavily, and nautical but nice in flavour,A Salty Dog is perhaps Procol's finest 40 minutes. The title track – a Brooker / Reid masterpiece which, astonishingly, was only a minor hit on 45 – is a romantic yarn of shipwrecks and seadogs, replete with lush orchestral arrangement. From there, the programme is rich and varied, sometimes whimsical, often hard blues-rocking. Standout songs: A Salty Dog, The Devil Came From Kansas, Boredom, All This And More.

Home (1970)
As commercial disappointment sets in, the mood becomes dark and bitter and the sleeve's board game graphics belie the record's sombre tones. Opening with Trower's killer riff, the rocking Whiskey Train recalls the verve of The Paramounts' live sound. From there, it's a tortured and twisted journey through such tales as The Dead Man's Dream, Still There'll Be More, About To Die (quite Band-like) and Whaling Stories, but the songs always retain that R&B edge. Not surprising, as the group now comprises an all ex-Paramounts line-up, plus the poetic Reid: 'I'll blacken your Christmas and piss on your door ...'

Broken Barricades (1971)
As is often the case, it is the songwriting credits of creative groups that tell the real story; they can be a mini-biography in their own right. On Broken Barricades, Trower scores a whopping three (out of eight) co-writes, all with Reid, further tilting the balance away from Brooker's early dominance. Not a very strong song collection, the sound of the group nevertheless starts to mature, though Trower soon quits to work with Frankie Miller in the short-lived Jude. Great drumming from B J Wilson throughout. Nuggets: Simple Sister and the title track.

Live With The Edmonton Symphony Orchestra (1972)
Much buoyed by ongoing success in overseas markets, Procol reinforce their considerable live reputation with the full Sir Malcolm Sargent. While it was this manoeuvre which may have given the group's detractors fresh ammunition (and unfairly dumped Procol in with Deep Purple and ELP), much of the material herein is eminently suited to the big treatment, and in the days before synthesized strings it did of course allow the group to perform A Salty Dog in all its orchestral glory. Also contains Conquistador, the hit.

Grand Hotel (1973)
After many years' touring and, one imagines, exposure to the sumptuous and historic hotels of the great European capitals, Keith Reid lets his imagination go crazy (again) while Gary Brooker delivers great sweeping melodies of operatic proportions. Sounds horrible, but Grand Hotel is actually a strangely moving record. Strong cuts: the title track, A Rum Tale, T V Caesar and For Liquorice John, inspired by the death of Dave Mundy, a friend from the old days who had recently fallen to his death from a Southend tower block. It should have been the big one.

Exotic Birds and Fruit (1974)
Side one is sensational, its four songs being among Procol's best. Toughly produced by Chris Thomas,Exotic Birds really is an overlooked gem and due for imminent reissue on CD. Those four killers: Nothing But The Truth, Beyond The Pale, As Strong As Samson (they come no better), and The Idol.

Procol's Ninth (1975)
Produced by songwriting legends Jerry Leiber and Mike Stoller, surely heroes of Brooker's, this is a slick though fairly unsatisfying work containing, for the first time, cover versions (Chuck Jackson's I Keep Forgetting and The Beatles' Eight Days A Week). But, once again, a surprise hit is included – Pandora's Box – perhaps justifying the more commercial production approach.

Something Magic (1977)
Actually something quite awful. If ever there was a good reason for punk, it's a record like this. The sound is tired, uninspired, and general hard work. Not only that, but all of side two is occupied by The Worm And The Tree, a weak sequel to Shine On Brightly's In Held 'Twas In I. Still, can't be easy after 10 years, can it? Following the commercial failure of this LP the group quietly suspends trading and Brooker goes fishing.

Prodigal Stranger (1991)
Procol re-form, though they never broke up! Full of modern drum sounds and digital effects, otherwise the traditional Procol sound. Robin Trower returns to contribute his trademark bluesy tones and the lyrical content is weighty. Disappointing sales-wise, though to be fair it received scant promotion, one hopes that Procol are not deterred from further recording activity.

This piece first appeared in Mojo

Email ThisBlogThis!Share to TwitterShare to FacebookShare to Pinterest
Labels: A Whiter Shade Of Pale, Procol Harum