A root and branch operation 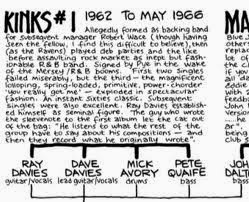 ZigZag was probably the UK’s first nationally-distributed rock fanzine, launched in April 1969 with Sandy Denny on the cover, price two shillings. It was the brainchild of Pete Frame, a fan of early rock’n’roll and folk-based rock’n’protest, and featured musicians too left-field for the mainstream music press to cover in depth, for example Phil Ochs, or Captain Beefheart (whose song Zig Zag Wanderer provided Frame with his title). Never enjoying a massive circulation, but retaining a steady readership of a few thousand obsessive fans, ZigZag was kept afloat by Frame for several years as he overcame the financial challenge of getting an issue out more or less monthly. Following the Frame years, ZigZag continued under the editorship of Kris Needs, but folded in 1986. The title was briefly re-launched in 1990 by new owners EMAP, publishers of Q, but survived only one issue.

It was in ZigZag #14 that Frame published his prototype ‘Rock Family Tree’ (to illustrate the ever-changing line-up of The Byrds). It was drawn in bar-graph style, but his formidable research and draftsmanship would soon come together to create the ‘rock family tree’ format we know and love. 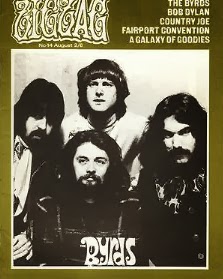 
Above the desk at which I scribble hangs the ‘framed’ artwork of ‘The Southend Scene’, which appeared in ZigZag #56 and details the evolution of Procol Harum, Mickey Jupp’s Legend, Dr Feelgood, and the Kursaal Flyers. Pete very graciously gifted this to me some years back. I am also the proud owner of ‘Pub Rock Afterglow’ and ‘Flying Burrito Brothers’, both awaiting framing. 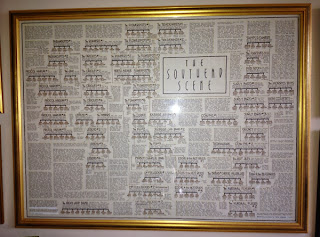 A recent exhibition at London’s Barbican Centre collected together a number of Pete’s Rock Family Trees and memorabilia, including the first draft of an unfinished Lonnie Donegan tree. I had to check with Pete that his Lonnie tree has never seen the light of print, because so many of his trees have, in various books and magazines, that it might have been easy to miss. But the tree has never been completed, which is surprising considering Lonnie’s crucial influence on the early UK rock scene, and Pete’s interest in that era. 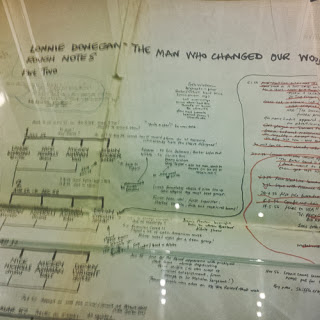 'Lonnie Donegan - the man who changed our world'

I do recall that Pete and I visited Lonnie in December 2000 at his London apartment. I was researching a feature for Mojo and Pete, I guess, was gathering material for his definitive history of early British rock’n’roll, The Restless Generation. Lonnie was the perfect host, warm, informative and funny in equal measure, and rather charmingly provided a luxury sandwich selection from M&S and a nice bottle of rose. We got the stories we were after and left happy. 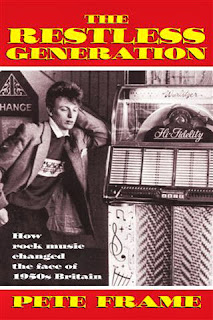