Time is a precious commodity and I confess I don’t listen to many new artists these days. There are still some late seventies Joni Mitchell records I have never fully absorbed and anyway, some of the up-and-coming acts I might be tempted to explore (Strypes and The 45s notwithstanding) tend to sound like something I've heard before, ages ago.

So, like many, I am re-buying the past. Again.

A Christmas indulgence was a batch of reissues from classic artists who were at their creative peak over 40 years ago, and each package came with a promotional sticker on the shrink wrap reminding prospective buyers how ‘important’ the recordings are, as if we didn't know. Is there anyone else out there who peels these stickers off the cellophane to attach to the sleeves? Or do you throw them away? 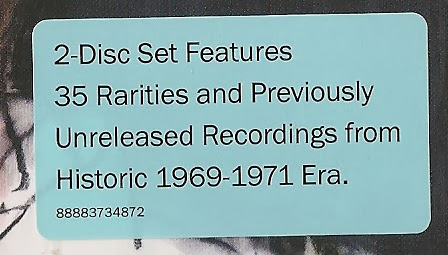 Bob Dylan’s Another Self Portrait ‘features... unreleased recordings from Historic 1969-1971 Era’ – an era, I recall, when most fans were of the opinion that Dylan was releasing relative crap. Famously, the doyen of rock journalists Greil Marcus, writing in Rolling Stone, opened his review of Self Portrait with the poser: ‘what is this piece of shit?’! But hearing the songs now, and those from New Morning in their unreleased, unadorned versions, is an intimate privilege. Check out for example Pretty Saro, or Copper Kettle. There is also a pricey deluxe edition with the full Isle of Wight/Band performance. I have it ‘saved for later’. 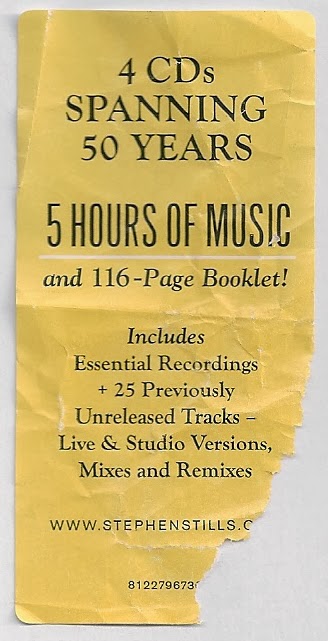 Stephen Still is one of my absolute favourite singers and Carry On (a 4-CD set) contains ‘essential recordings’ (it says here). I would have to agree that many of the 82 tracks are just that, including key songs with Buffalo Springfield. Also convenient, and a high point is the back-to-back quadruple whammy on disc 2 consisting of It Doesn’t Matter – Colorado – Johnny’s Garden – Change Partners. Having recently read the Graham Nash autobiography, Stills remains an enigma and is the only member of CSNY who, as far as I know, is yet to be the subject of a book, although an autobiography is apparently on the way. 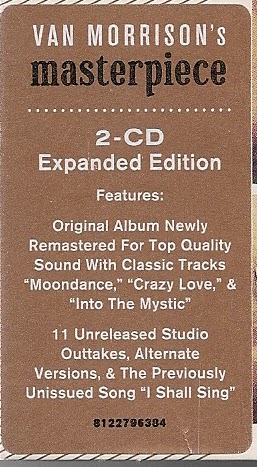 Moondance is ‘Van Morrison’s masterpiece’ (cries the sticker on the new ‘2-CD expanded edition’). Where that leaves Astral Weeks or St Dominic’s Preview I’m not sure, but yes, it’s up there, although Moondance has never sounded, to these ears, as good as it might. I thought my original vinyl copy was a dodgy pressing until I heard the first CD reissue about 15 years later, but the clarity of this newly mastered edition makes me realise that it’s only the opening track And It Stoned Me that (still) sounds a bit crunchy. I wonder if there are any audiophiles who can offer a more technical analysis. It seems to be the vocal – is it slightly over-recorded or distorted? Otherwise, of course, one of the best records ever made. 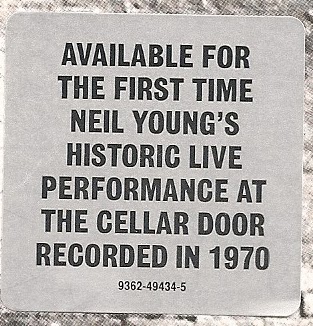 Neil Young has recently been in the news for berating his Carnegie Hall audience for ‘clapping along’ to, of all songs, Ohio. ‘Wrong!’ he snapped. I’m with Neil on that, especially if said clapping was in full horror Strictly Come Dancing style, i.e. on the one and the three, but I’ll save that rant for another day. Live At The Cellar Door (a ‘historic live performance’) from Washington DC’s tiny Cellar Door in 1970, also features some clapping, but here it’s the clap of recognition during the opening bars of - ‘off my new album’ - Only Love Can Break Your Heart. But strangely, no such self-congratulatory behaviour greets Expecting To Fly.