‘I was born in Bethlehem’ claims Jesus of Cool 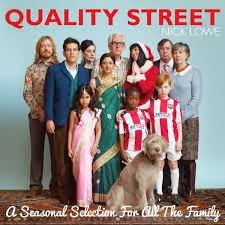 Once seen, particularly in America, as the feather-ruffling arch cove of New Wave; king of the uber clever song lyric; the fastest-livin’, hardest-drinkin’ gorblimey Limey who rocked with Rockpile - jolly-japing and pillaging from coast to coast, Nick Lowe is the last modern vocalist one would expect to deliver ‘a Christmas album’. Unless, of course, one has been paying attention to his musical continuum since 1994’s The Impossible Bird…

With the release of each new album – which occurs about as frequently as a leap year - Nick’s musical settings have become progressively more mellow, his rhythms slightly less ‘rocking’ (although, of course, they swing like mad), and his lyrics, crucially, less cynical. And looking back over his lengthy recording career, he is simply doing what he has always done – the unexpected.

Quality Street sees Lowe taking a break from his regular gig. Think of it as a holiday. In the words of his old buddy Huey Lewis, it’s hip to be square, although the record is anything but ‘L7’. As Christmas albums go, it’s a turkey-free zone that pulls together some rarely heard or forgotten songs; a few traditional items given a seasonal makeover, and brand new compositions from Nick and some estimable associates.

The rarely heard or forgotten variety of song includes Roger Miller’s father and son-friendly Old Toy Trains, in which dad urges son to go to bed so dad can don the Santa costume and make a delivery. Christmas Can’t Be Far Away, made popular by country star Eddy Arnold, and written by Boudleaux Bryant, observes the changes in peoples’ moods as the season of goodwill approaches. In particular, Bryant fingers ‘old tight wad’, who is ‘buying candy to pass out to the neighbour kids at play’.

The best known of the traditional songs, alongside I Wish It Could Be Christmas Every Day (the Wizzard song, which could almost be said to be traditional), is Silent Night, delivered here upbeat, with brass. The opening Children Go Where I Send Thee sets the biblical vibe, as does Rise Up Shepherd, with skiffle rhythm and gospel treatment.

In the ‘new’ category are A Dollar Short Of Happy, a co-write with Ry Cooder, and Hooves On The Roof, a truly surreal vision from the great Ron Sexsmith. Story goes - seeing as it’s Christmas and games are in vogue - when Nick and Ron tour together, the endless miles are eaten up by ‘Funny/Not Funny’, in which participants are asked to contrast two well-known entertainers, as in: ‘Ozzy, funny; Sharon, not funny’ (this example courtesy of Lowe’s sound producer, Neil Brockbank).

Christmas At The Airport, its melody sailing dangerously close to A Good Year For The Roses, finds its narrator stranded in an air terminal that’s in shutdown mode due to winter weather – ‘now the doors are locked and bolted; let the festivities begin!’ What is there to do? Think Mr Bean in Toys R Us around midnight…

The author’s lyrical powers are at their height in I Was Born In Bethlehem, with its vocal up close and confidential (as in Basing Street or The Beast In Me). Speaking as the son of God, as yet unborn, he reports his family’s search for an empty bed in downtown Bethlehem. ‘It was cold, I was late, and we stood outside the locked gate at the inn… where my sweet mother, meek and mild, and herself only a child, gave her best then took her rest…’ It is a song that should see fans returning to this record, one that pays unexpected dividends with each listening. Whether or not he is ‘Britain’s greatest living songwriter’ (as he is described on The Brentford Trilogy CD set) is a highly subjective matter, but if not, who you gonna call?