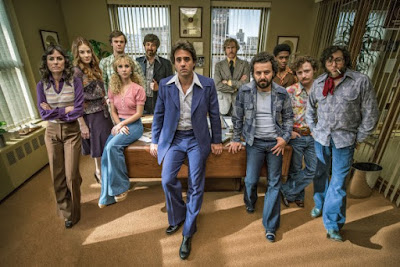 As an A-grade nit-picker I was determined not to be irked by the inevitable anachronisms in Vinyl (HBO/Sky Atlantic). I would sure as hell find them, but I didn’t want any trivial inaccuracies to spoil my enjoyment of what promised to be Mad Men on Tin Pan Alley. From a TV drama series point of view, it was crying out to be made, and this show has been at least five years in development and production, so it should be good.

I soaked in the scene in which lead protagonist Richie Finestra (played by Bobby Cannavale) is guzzling on a fifth of some dark spirit, then rips the rear view mirror from his unloved car interior to furnish a glass surface from which he can snort from a quarter of ‘blow’, freshly purchased from an over-animated street dealer. Then I heard in the background the giveaway refrain of ‘Stranded In The Jungle’, only to wonder why followers of what had to be the ‘New York Dolls’ run towards ‘The Mercer Arts Center’, in an era when cool indifference was the teen and twenty norm. ‘Personality Crisis’ heralds the first sighting of this non-fictional act, and ’Johnny Thunders’ is quite authentic.

Finestra, perhaps loosely modelled on Sire Records’ Seymour Stein, is a fan at heart, hopelessly hooked on early rock’n’roll and, like Stein, has an uncanny knack of just happening to rock up to some dive that is giving birth to the next big music craze. It’s ‘1973’ remember, and although the presence of the New York Dolls is credible (their debut album on Mercury appeared that year), the suggestion that this is also the dawn of hip-hop - represented by 12” platters on twin turntables being lightly ‘scratched’ by a deejay’s hands - is ludicrous.

But this is not a series that has been created for jaded music biz execs, seen-it-all musicians, and cynical hacks. It is aimed fair and square at the gawping TV market that sits through Nashville, and was probably glued to Rock Follies all those years ago. And producers Mick Jagger and Martin Scorsese are both masters of the over-exaggerated gesture and spectacle.

So, breath deeply, unfurrow the brow and stay tuned… we see Finestra in his well-upholstered New York pad with full park view, while his wife and small kids appear to live elsewhere in the city. Although the wife’s character requires some development if their relationship is to drive Finestra’s angst, it’s a back story that rings true; an adolescent obsession with early R&B and doo-wop; a penchant for Bo Diddley; the discovery and recording of a young black singer who would be exploited and literally beaten by some shady mobsters (apparently muscling in on a record label boss, presumably fashioned on Sid Nathan or Morris Levy), and a bizarre and empty marriage.

Finestra goes on to found a mainstream record label, ‘American Century’, with midtown offices in (where else) ‘The Brill Building’. The walls are adorned with gold discs, but this appears to be a hollow enterprise built on hype and payola. In an A&R meeting Abba’s ‘Ring Ring’ is given a brief assessment, and we are told (if I heard it right), ’They’ve just signed to Atlantic in the UK’… ahem.

An hilarious meeting with the label’s German backers, in an office adorned with Deutsche Grammophon LP sleeves, possibly echoing Polydor’s dabbling in the US rock scene, allows for some some mild anti-Semitism and humorous digs at the Nazis – touché!

While the background music is knowing - Blue Cheer, Edgar Winter, some light country rock - the show is marred by a scene so crass and laughable that the whole premise is blown. Finestra is backstage at a ‘Led Zeppelin’ concert, and we are led to believe that their record contract (with Atlantic, or possibly Epic) is up for renewal. And while manager ‘Peter Grant’ is berating the promoter, effing and blinding in a scene taken directly from The Song Remains The Same, Finestra gets into a dialogue with ‘Robert Plant’ in which there is a crude discussion about contractual detail and royalty rates. My cringe-o-meter was off the scale.

And then there’s a nasty murder, naturally, and a cinematic climax featuring what appears to be one of New York City’s extremely rare earthquakes, sort of implying that the Dolls rock so hard they can literally bring the house down. But even if a dose of sensationalism is necessary to drive the ratings, the show itself falls down on one major detail; there simply isn’t enough cocaine.

As Brian Moylan notes in The Guardian: ‘There is a great show to be made about pop music and how it shapes our culture, but this isn’t that show.’