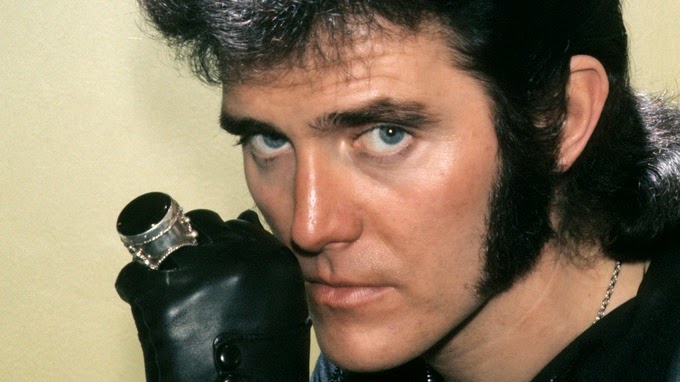 There was once a local rumour that his mum ran the newsstand on Wickford Station (eastbound side), but that may have been someone’s ‘Jealous Mind’ when the mighty Alvin Stardust dominated the UK hit parade, circa 1973.

Despite his ludicrous leather cat-suit and platforms higher than, well, the platform at Wickford Station, I had a sneaking admiration for the man I recognised as the late ‘Shane Fenton’ (born Bernard Jewry), who led The Fentones (drummer Bobby Elliott, later of the Hollies, check out ‘The Mexican’) and enjoyed semi hits such as ‘I’m A Moody Guy’ (1961), and ‘Cindy’s Birthday’ (1962), blonde locks and all.

Then he rose as the mighty Alvin, with monstrous sideburns and a jewel encrusted leather glove, sinister in the extreme. Amazingly, his teenage audience was not scared, or deterred from buying his 45s by the ton. Then, for the third phase of his recording career, still hanging onto to his ‘Alvin Stardust’ persona, he rather surprisingly turned up on Stiff Records with a great version of fifties rocker Carl Mann’s ‘Pretend’ (you’re happy when you’re blue). It was Stiff’s Dave Robinson who saw the potential for a re-sprinkling of Stardust, and staged his rebirth.

Around 1983, I found myself in the studio with Alvin, courtesy of Stiff, when he recorded a cover version of ‘Laughter Turns To Tears’, a song I’d co-written with ex-Rockpile guitarist, Billy Bremner. extract here, play clip

I remember Alvin turning up at Nick Lowe’s tiny AmPro studio in Shepherd’s Bush. It was a good job he wasn’t wearing the giant shoulder pads. We later transferred to Eden Studios in Chiswick, and I recall that when we retired for a break at a nearby pub, the polite and mild-mannered Alvin determinedly sat with his back to the busy room to avoid attention, such was the scale of his celebrity, even at that late stage.

He was once famously married to actress Lisa Goddard, and was, I believe, a Master of Wine, not that he would ever dream of mentioning the fact. As a journeyman pop singer he was not averse to entrusting his light but expressive vocal skills to hit producers such as Mike Batt, who wrote and produced the 1983 hit ‘I Feel Like Buddy Holly’, or Jonathan King, who produced Alvin’s creditable cover of Springsteen’s ‘Growin' Up’. view on Youtube

Then the bastard cancer got him – prostate - that most insidious variety that lurks in the back passage of many a groovy old boy. It’s said that more men die with it, than from it, which is of dubious comfort. A PSA test, free on the NHS to over 65s, is available:

Alternatively, a regular physical check up is recommended, even of it means a doctor’s finger up the jacksie for five eye-watering seconds. If in doubt, get checked out:

Meanwhile, Alvin, have ‘A Wonderful Time Up There’. I really loved your ‘Coo Ca Choo’.