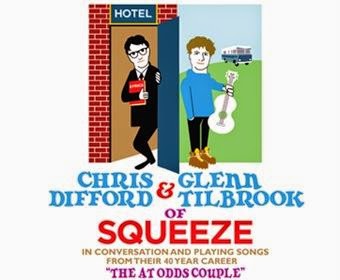 The imminence of the Glenn Tilbrook / Chris Difford tour as ‘The At Odds Couple’ in the autumn of 2014, and reports of Danny Baker's upcoming TV series Cradle To Grave featuring new Squeeze songs, have reminded me to revisit a piece I wrote for Mojo back in 1996. It is reprinted below.

In reviewing the original text, which was simply a list of my favourite Squeeze songs, I see that I omitted ‘Some Fantastic Place’, a song that today I would immediately insert in a collection of 12. In fairness to my oversight, ‘Some Fantastic Place’ was a relatively new song at the time of writing the piece and had not fully sunk in, but today I hear it as one of their best. Here is the original piece: 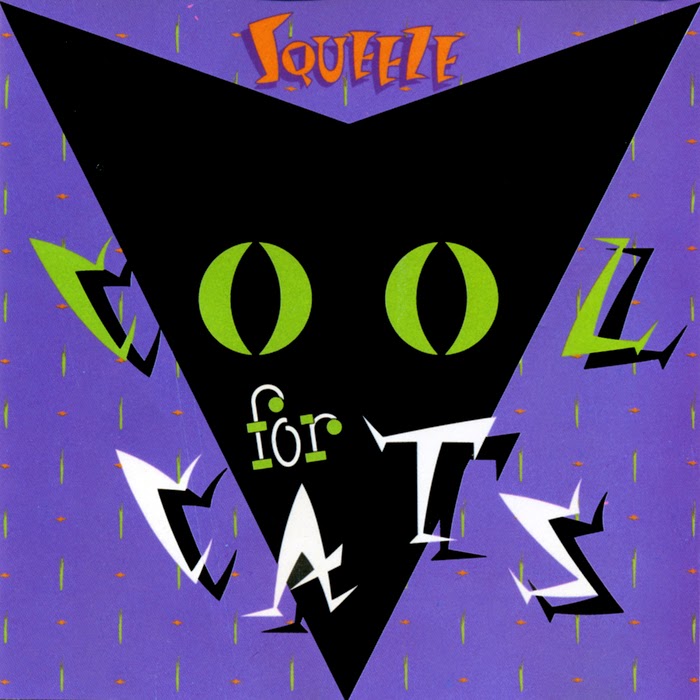 "The Indians send signals from the rocks above the pass /  The cowboys take position in the bushes and the grass…”
In the beginning the signals that Squeeze sent out were of the mixed variety. Saucy song titles; a vague punk veneer; an EP produced by John Cale; management by Miles Copeland (a former Wishbone Ash man).  Not surprisingly, many were disinclined to investigate their early Cheap Trick-ish power pop and general toilet talk, but with the release of Cool For Cats a distinct musical direction started to emerge in songs like ‘Revue’ and ‘Goodbye Girl’. By the time of Argybargy, most of the flab had been cut away to reveal a pop group of the highest calibre. And it was always the combination of Chris Difford’s words and Glenn Tilbrook’s urgent melodies and McCartneyesque vocal that distinguished the group’s greatest songs. These are they:
‘Up The Junction’ From Cool For Cats (A&M) 1979
“She said she’d seen a doctor and nothing now could stop her…”
Several early Squeeze songs took their titles from British films of the 1960s and early TV pop shows, providing an irresistible point of reference for the slightly older listener. ‘Up the Junction’ is a skillful story full of deliberate nearly rhymes – happen / Clapham, common / forgotten, assumption / junction, etc, welded to an unforgettable melody. Possibly their most dearly-loved song.
‘Goodbye Girl’  From Cool For Cats (A&M) 1979
“The sunlight on the lino…”
I once heard that Dave Edmunds was asked to consider recording this song, but he left his copy of the record on the parcel shelf of his Jag and it ended up flowerpot-shaped. 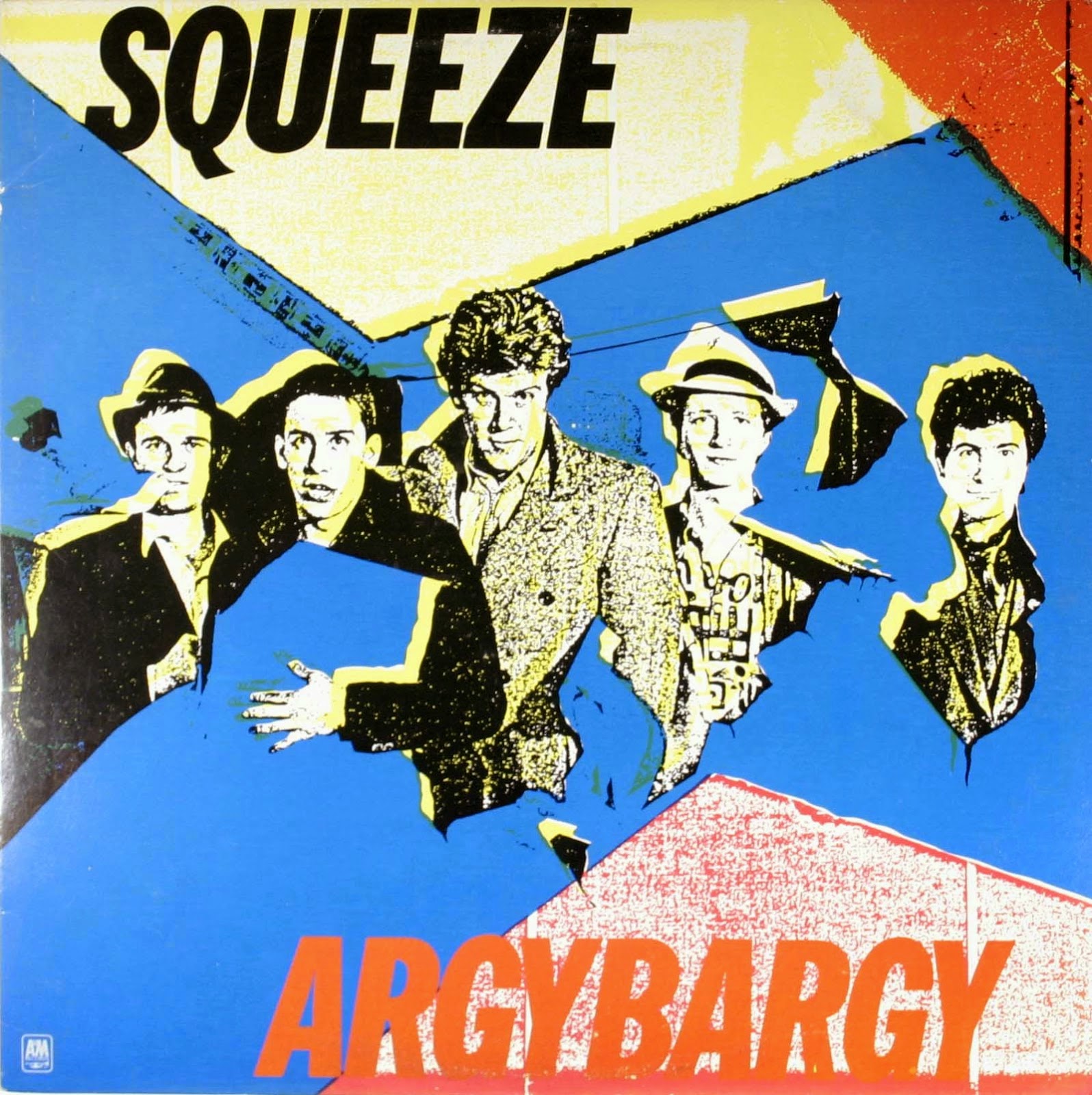 ‘Pulling Mussels (From The Shell)’  From Argybargy (A&M) 1980
“Coach drivers stand about, looking at a local map…”
Opening the breakthrough Argybargy, this is a song about holidays, day trips and, I think, sexual activity thereon. Whether it’s a beano to Brighton or a week in Waikiki (where “surfers drop their boards and dry…”), the lyrical detail is dense – “a he-man in a sudden shower shelters from the rain…”, two fat ladies window-shop for “something for the mantelpiece…” A quick glance behind the chalet and the song is complete.
‘Another Nail For My Heart ‘ From Argybargy (A&M) 1980
“She made a call to a sympathetic friend and made arrangements…”
Argybargy track two and the melodies are stacking up faster than 747s over Middlesex. Tilbrook’s hoarse vocal is less choirboy-ish than usual. There’s that little ‘Waterloo Sunset’ lick in the guitar break. I’ve never been able to work out the exact words of the chorus. They sound like “So play the song that makes it so tough…” and “In the bar the piano has found… another nail for my heart.” Answers on a postcard… 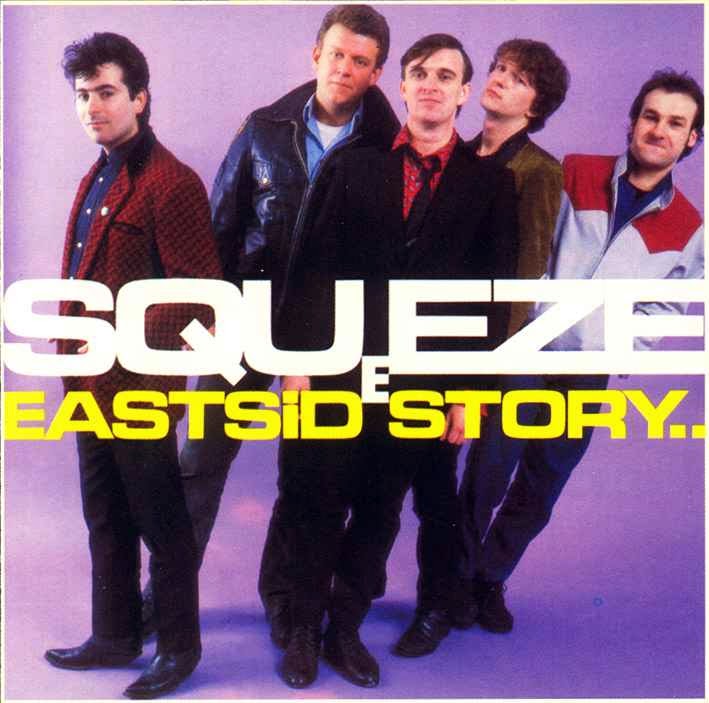 ‘Woman’s World’  From East Side Story (A&M) 1981
“Whistles to the radio now (sic), every hook she catches…”
A majestic guitar intro gives way to a tale of domestic drudgery… “but she likes to wear the crown of the kingdom.” Men may iron or change the bed, but rarely without being asked. Whatever they say about equality, it’s usually the girls who end up doing the shitty jobs. The sheer repetition of household chores is captured perfectly at the end of the song – “press the button on the toaster… tuck the sheets in on the bed… it’s a Woman’s World.” Makes you wanna go down the pub.
‘Is That Love ‘  From East Side Story (A&M) 1981
“You’ve left the ring by the soap, now is that love?”
An up-tempo power pop classic, it you’ll excuse the term, and more domestic tension. Is that what produced this amazing run of great songs in 1980?  “Legs up with a book and a drink…”  It beats hanging around in bars. The false ending always catches out half the audience at Squeeze concerts. Are they, God forbid, unfamiliar with ‘Is That Love’ and its host LP?
‘Vanity Fair’ From East Side Story (A&M) 1981
“She poses foot on a chair, coconut shy but vanity fair…”
Glenn with strings, in a moving portrait of every young girl’s growing pains… She “has her eyes on medallion men that get her home on the dot at ten…”  When she “comes home late with another screw loose, she swears to have had just a pineapple juice…” She “might not be all there” but every line, I swear, is a tearjerker.
‘Tempted’  From East Side Story (A&M) 1981
“I said to my reflection let’s get out of this place…”
“Past the church and the steeple, the laundry on the hill…” The laundry on the hill! This is the absolute pinnacle of Difford and Tilbrook’s genius, with the bonus of Paul Carrack’s vocal, interrupted by Tilbrook’s cameo in the second verse – “I’m at the car park, the airport, the baggage carousel…” Elvis Costello’s falsetto and deep-voiced interjections produce the surprises, while Carrack’s growl at 3.19 is a landmark in his distinguished vocal career.
‘Man For All Seasons’  (by Difford and Tilbrook)  From Difford & Tilbrook (A&M) 1984
A brief and invigorating track from a breakaway ‘project’. After East Side Story, where was there to go?  Funny, this group business. Imagine the Beatles disband after Revolver and John and Paul make Sgt Pepper as a duo. No ‘Within You, Without You’, that’s for sure. From this point on, memorable songs from Squeeze are a little thinner on the ground. In fact, we have to leap forward five years to locate their next stroke of pop greatness… 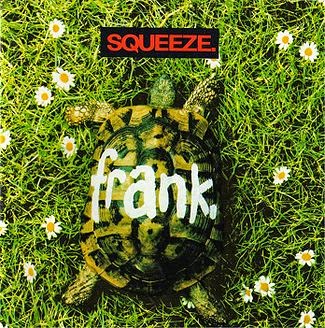 ‘If It’s Love’  From Frank (A&M) 1989
“If it’s love, that would really explain it, how I feel like I’m covered in wool…”
The way Tilbrook twists and stretches the melody on the word “love” throughout the song is a source of pure enjoyment. It’s particularly affecting at 0.52 and 2.22.
‘Cupid’s Toy’   From Play (Reprise) 1991
“This boy doesn’t give love, this boy doesn’t get love…”
String-laden standout from otherwise ambitious LP that evokes memories of listening to Smokey Robinson records in an otherwise charmless disco where an empty-headed Casanova “stalks the club with eagle eyes…” He has “a pea for a brain, a spud for a heart.” Where does all this inspiration come from and where, one might ask, does it go?
‘Electric Trains’  From Ridiculous (A&M) 1995
“I played a willow cricket bat guitar…”
Light at the end of the tunnel; proof that, although Chris and Glenn may have spent the odd night in the sidings, an express can come along at any moment.
Will Birch © willbirch.com
First published in Mojo, January 1996

Difford and Tilbrook ‘The At Odds Couple’ tour

For news and updates on music pub pop power punk related:
Follow Will Birch on Twitter
Posted by Will Birch at 01:58 No comments: