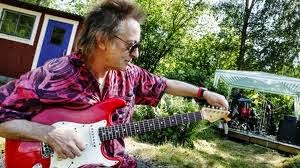 There is no doubt that the British rhythm and blues combo Dr Feelgood was as much a hot house for great guitarists as were The Yardbirds (Clapton, Beck, Page...), or that Wilko Johnson created the template on which the Feelgoods’ sound was built. And so, when in 1977 Wilko departed the band he lovingly formed with Lee Brilleaux, Sparko and The Big Figure, it left an impossible void.

For a moment, the Feelgoods’ considered seasoned pro Henry McCullough (Wings), and others, to step up to the plate. Not to ‘dis’ such capable musicians, but sometimes it takes more than musical chops to complement an existing combo and help drive it into a future it deserves. It was therefore major good fortune that brought the Feelgoods’ attention to one John Philip Cawthra, born London, 1951.

They ‘found’ him (and nearly didn’t) in Harlow, Essex. He was living in a squat with a guitar, an amp, and a stack of blues LPs. The Big Figure was sent to kidnap him, gangland style. He was told that his name was ‘a bit of a mouthful’, and so a telephone directory was slung in his direction, with the command, ‘pick yourself a name out of there’. The pages fell open at M, and ‘Mayo’ jumped out. When Lee Brilleaux observed that their new guitarist always seemed to have some medical complaint – ‘the gyp’ – ‘Gypie Mayo’ was born.

It was a tough challenge to follow the great Wilko Johnson, bur Gypie managed, and introduced into the Feelgood mix a broader musical palate. The sounds of Stax, Motown, and even Beatles-baked riffs suddenly fell at the group’s disposal. Mayo had listened to it all, absorbed it, and poured it out through every sinew of his dextrous chord-shaping fingers. Needless to say, Brilleaux was impressed.

It fell to Nick Lowe to fashion a whole album’s worth of material from a band that was still reeling from the departure of its major songwriter, Wilko. ‘I felt my job was to help them get a foot in the door,’ says Nick. ‘I used to go down to Canvey to their rehearsals, and helped to bring the songs together in a collaborative way. Gypie was a fantastic guitarist and he was perfect for them.’ 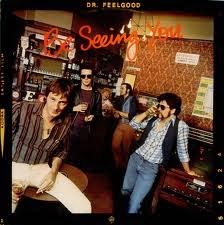 The resulting album was Be Seeing You, and the following year Lowe was again called in to assist with a song for the next Dr Feelgood LP, Private Practice. ‘I think I might have been in bed when they called. I went over to Eden. I can’t remember if they had the title Milk And Alcohol, but we were talking about an experience we’d had in the States a few years earlier, when I was a Dr Feelgood roadie.’

Milk And Alcohol, based on a guitar riff by Gypie, became the Feelgoods’ biggest hit single. They had also scored with a cover of Mickey Jupp’s Down At The Doctors, and it was the success of these records in 1978/79 that fuelled the Feelgoods’ bankability on the live circuit throughout the turn of the next decade.

But by 1980 Gypie had become tired of being part of a relentless touring machine, not that he disliked the music, the great album A Case Of The Shakes was testament to the musical excitement he helped create. But the constant strain of being pulled away from his young family was too much, He had also fallen victim to drug abuse, as he openly admitted to me earlier this year. ‘We worked ourselves a little bit too hard,’ he said. ‘There were two reasons I quit; one was domestic, and the other was that we simply didn't have time to work on the music. We were burnt out and it was down to me to be the creative one and come up with ideas. I felt I wasn't able to fill that role. I’m not proud of the fact I became addicted, but I’m not deeply, deeply ashamed either.’

Many years passed before Gypie settled into his next name band, the re-formed Yardbirds. To fill the shoes of their legendary players like Clapton and Beck was a doddle for Gypie. He had it all down, a master player, and a true gentleman. In more recent times Gypie travelled to Japan with former surviving Feelgoods colleagues Sparko and Figure as ‘The Lone Sharks’, and also became a guitar teacher in Bath.

A DVD set of Dr Feelgood from ‘Rockpalast’ 1980 is due soon from Repertoire Records.
The totality of Gypie’s recorded work with Dr Feelgood can be found on the luxury box set ‘Taking No Prisoners’. 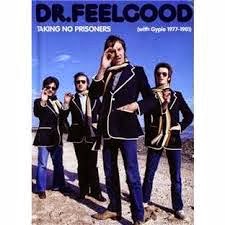