40 years of Peace, Love, and Understanding 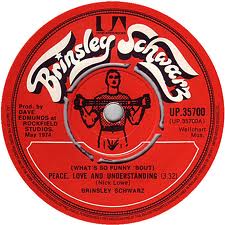 As this majestic song enters its fifth decade, some of us will recall those barroom comedians who couldn't resist uttering 'Yeah, peace and love, man', as one of our longer-haired brethren shuffled past. It was the predictable dig from hippie-bashers, post-Woodstock, as they taunted anyone in an ex-army greatcoat and loon pants - as later portrayed by Nigel Planer's 'Neil' in The Young Ones. But what on earth was wrong with peace and love? Are they not the universal goals of civilisation? The 'joke' became tiresome and was possibly what was on Nick Lowe's mind when, in 1974, he sat down to pen a new take on the dull cliche.

Lowe has since described composing the song as 'the seismic moment' of his early songwriting career. Title-wise, he may have been subconsciously influenced by The Gaylads' 1970 ska classic 'Peace Love And Understanding' as it boomed out from a North London jukebox around the time his group was packing 'em in on the London pub circuit. Tune-wise, Lowe acknowledges the influence of Judy Sill and her 'ginchy little lick' in 'Jesus Was A Cross Maker'.

When the song opened The New Favourites of Brinsley Schwarz in 1974, '(What’s So Funny 'bout) Peace, Love And Understanding' sounded fabulous and modern, with its power chords appropriated from The Who and a lyric that at first seemed tongue-in-cheek, cynical even, but one that has gained in poignancy in today’s even more ‘troubled times’. 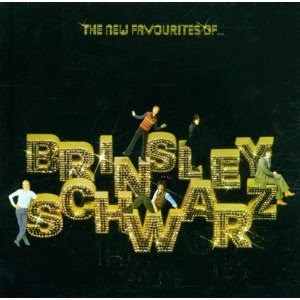 ‘The Brinsleys’ had troubles of their own, still scarred from the 'The Fillmore Hype' of 1970, in which a planeload of journalists were flown to New York to witness the group’s hesitant debut. Although they established themselves as kings of the London pub rock scene, they had become trapped. It was thought that recording with ace producer Dave Edmunds would yield some hits, but within a year the group had disbanded, sick of communal living and one too many trips up the motorway to play Scarborough Penthouse Club yet again.

But ‘Peace, Love and Understanding’ would have a life of its own. In 1978 it was recorded by early Brinsleys fan Elvis Costello, and released on the US version of his Armed Forces LP. Then, in 1992 the song was covered by American musician Curtis Stigers for the soundtrack album to the hit movie The Bodyguard. It is said that leading actor Kevin Costner, himself a rock music fan, insisted on its inclusion. It became the biggest selling soundtrack recording of all time, clocking up sales in the tens of millions. Consequently it earned Lowe considerable royalties, allowing him to work at a more elegant pace, but also enjoy artistic control of his subsequent music and retain his trusty road band. The song is still a permanent fixture in Lowe’s live shows. Sung at a slow tempo to acoustic guitar accompaniment, it has acquired an almost hymn-like quality and his attentive audiences listen in reverence.


Nick Lowe recalls the song’s genesis: “I think I’d originally thought of it as being funny, because the old hippie thing, which I’d invested a lot of my time and energy into, had become a load of old bollocks. I had that poetic thing… ‘As I walk this wicked world, searching for light…’   I was doing it tongue in cheek, using those words, thinking about some hippie saying, ‘It might be all changing now but when it comes down to it, you might laugh, what is so funny about…’ I thought it was a fantastic title, I couldn’t believe my luck. As long as that title popped up now and again it didn’t really matter what I sang about in between… of course I thought peace and love were basically good, but suddenly the old dream was over and I was in the right place at the right time, front and centre, to come up with something like that.  It was a sort of waking up song.”

With thanks to Pete Silverton, who clued me up on The Gaylads