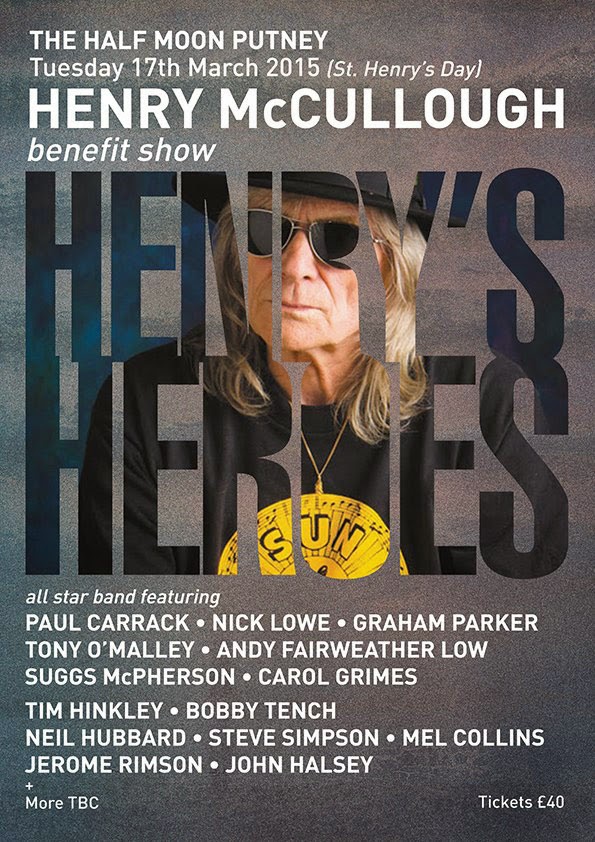 Putney’s Half Moon was heaving on St Patrick’s night with great music, familiar faces, and five of the biggest ‘stars’ loosely associated with London’s old pub rock scene. It was all in aid of former Grease Band and Wings guitarist Henry McCullough, who in 2012 suffered a massive heart attack and now finds himself in reduced circumstances and wheelchair-bound.

The charitable evening was proposed and skilfully organised by Dave Robinson, of Stiff Records fame, who has known Henry since the 1960s when Dave managed Irish band, Eire Apparent.

The evening’s music commenced with a funky set by London’s world-class musicians, Tim Hinkley (keyboards/vocals), Mel Collins (sax), Neil Hubbard (guitar), John Halsey (drums), Bob Tench (guitar/vocals), Steve Simpson (guitar/vocals), and Kuma Harada (bass). The Band’s ‘The Shape I’m In’ and McCullough’s ‘Gone With Another’ were stand-outs. Kokomo’s Tony O’Malley made a guest appearance for Bill Withers’ ‘Use Me’, and the band was then on hand to furnish versatile accompaniment for some of the name singers that followed.

In between sets there was an auction, in which many items of rock memorabilia went for eye-watering receipts, largely down to the style and skill of auctioneer, Nick Stewart. These included a platinum disc for ‘Dark Side of the Moon’ (awarded to McCullough); a set of Beatles LPs (signed by Paul McCartney, whose virtual presence was duly noted), and some fine cheddar cheeses, 45-disk shaped, with appropriate ‘record labels’, courtesy of the Town Mill Cheesemonger. The ‘So It Goes’ / ‘Heart of the City’ cheese went for £600.


First-up, post auction, was Nick Lowe, who received a hero’s welcome from the capacity crowd and delivered a chilling version of McCullough’s ‘Failed Christian’. Nick was soon joined by Andy Fairweather Low and Paul Carrack for an acoustic and harmony strum along on some old classics, including Ray Charles’ ‘Crying Time’, Bobby Darin’s ‘Things’, and Johnny Cash’s ‘I Don’t Hurt Anymore’.

It was then left to Carrack to rouse the audience with his evergreen ‘How Long’, which no doubt reminded Paul of a football crowd sing-along on the Sheffield Wednesday terraces.

Graham Parker was up next for storming performances of  ‘Local Girls’ and ‘Soul Shoes’. Close your eyes and it could have been The Rumour, so sympathetic was the band.

The evening finished with Suggs, who was charm personified, delivering his Madness hits, ‘It Must Be Love’ and ‘Madness’.

Should you wish to make a donation to the Henry McCullough cause, a Facebook page has been set up here

To round off a great evening with lots of rocking music and old friends, I made the trip back into town on the tube with GP, who agreed it was a classic night for sure. Let’s hope it raised plenty of dosh for Henry.