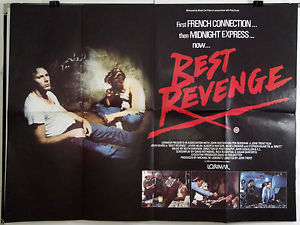 he recent and tragic death of Keith Emerson has caused me to reflect on a brief period in which we collaborated on a song, as unlikely as that may seem.  As a lad I saw The Nice several times when they ruled the Marquee. They were extremely exciting and their debut album The Thoughts of Emerlist Davjak dominated my turntable during the cold winter of 1967/68.

I had never knowingly heard ‘ELP’, except for their 1977 hit single, however in 1983 my then music publisher was looking out for ‘projects’ he could pass my way in an effort to generate some royalties and claw back the generous advance I had been paid. One day I was told that Keith Emerson, no less, needed a lyricist to work on a song for a film he had been hired to compose for. I was sent a rough cut of the movie, a drug smuggling caper shot in Spain and starring John Heard and Levon Helm. It needed a theme song.

I met up with Keith at his club (Morton’s in Berkeley Square), and listened to his requirement. He struck me as a bit of a cold fish, and quite humourless. I thought he was a bit of a square, but I couldn’t allow that to stand in the way of a commission. A week or so later we met at his apartment in a mansion block close to Olympia. He was in training for the London Marathon and came to the door in shorts and Nike trainers. He played me the tune on a keyboard and handed me a cassette containing the film’s theme song to go away with and put words to.

Whilst I was quite confident, over-confident maybe, of my ability to write lyrics, this was a real challenge. Nothing too clever, nothing ironic - think ‘Eye of the Tiger’. So I scribbled down some obscure nonsense that scanned, and perhaps reflected the movie’s storyline. To present my effort (entitled ‘Playing For Keeps’, which was the working title of Best Revenge) to Keith, I was invited down to his impressive pile in East Sussex. I was a bit nervous and enlivened my train journey to Battle with an illicit pick-me-up.

He met me at the station in his rag-top Morgan with wire wheels, the works, and whisked me off to ‘Stonehill House’, formerly the home of Peter Pan author, J M Barrie. Electric gates, gravel drive, beams, beams, and more beams. After a coffee, Keith wanted to leave me alone in his kitchen to do some further work on the eight lines that would hopefully enhance his theme, while he went to his private gym to exercise. An hour or so later he appeared and offered to ‘show me round’.

He took me into an enormous barn that contained some recording equipment and a rehearsal space. There, on a high podium, sat his white Hammond organ. He turned it on, cranked up the volume and, I swear, commenced to play the bass riff to ‘Fanfare For The Common Man’. And as he stood there pumping it out, very skilfully I have to admit, he shot me a glance that kind of said, ‘Cool, eh?’

When we returned to the kitchen he looked over my lyrics. ‘Erm…’ he said, ‘not bad.’ He needed time to think about it, to see how they might fit his tune, and offered to run me back to London where he had some appointment. We chatted on the way, and I asked him some fan-boy questions about The Nice. He dropped me off in Fulham and that was the last I saw of him.

I heard nothing more and thought that either the film had been dumped or my lyrics hadn’t quite cut it. But then, about a year later, as I was casually viewing Film 84 on TV, I heard Barry Norman say, ‘And now a film about a drug smuggling operation, set in Spain, and starring John Heard…’ There was a brief clip from Best Revenge and that was that. ‘Good for Keith,’ I thought. ‘His theme music has seen the light of day.’

A week or so later I noticed that Best Revenge was playing the ABC Edgware Road. So I went along to see it, dying to hear its theme tune and the words that presumably some other lyricist had set to Emerson’s music. But when it blasted out over the cinema speakers, there were MY WORDS! Several lines of them! How could this be? What would my publisher say? I sat through the film credits, as one does, only to see: ‘Theme song “Playing For Keeps” by Keith Emerson and Brad Delp’.

At this point, and I hope this doesn’t come across as a hard luck story, I recognised the name ‘Brad Delp’ as the vocalist from ‘Boston’, hit makers of ‘More Than A Feeling’ (what a great record!). Maybe Brad also had a way with words, a way maybe of having it away with MY WORDS! I contacted my publisher: ‘I’ve been cheated!’ I exclaimed. Investigations commenced and Mr Emerson was sent a robust letter.

I am not a litigious person, but can be quite tenacious, even though I knew any royalties would be minimal. It was a matter of principle. Several years elapsed as reams of paperwork piled up; letters to and from publishers, royalty collection societies, lawyers, managers, and Keith himself. In 1988, he accepted that some of my lyrics had been used by Brad Delp and promised to contact him. 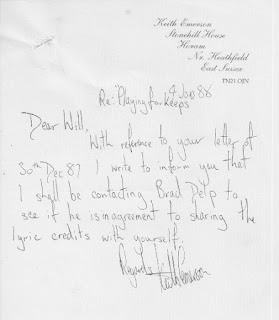 It took him three years to track down Mr Delp, who eventually did agree to us sharing the credits and royalties. During this lengthy period I harboured a grudging dislike of Emerson as I felt he must have known that Delp had incorporated some of my work into the song, but on revisiting the correspondence over 30 years later I can see that he was probably too busy to get involved in such minutiae and I now appreciate that he made a sterling effort to contact Delp on my behalf and persuaded him to agree to sharing the credit.

I don’t expect anyone to be that interested in this rambling story about an obscure piece of music, although it did subsequently earn me a four figure sum which at least made a small dent in the publishing advance I had received back in ’83.

You can hear some of my dreadful lyrics here

‘Out of a timeless age, independent in their way… taking a chance on a dance, partners in crime waltz away…’

Who writes this nonsense?!

Brad Delp died in 2007. Sadly, like Keith Emerson, he had committed suicide.