Teenarama - 'injections in the knee'

Teenarama, is what you’re giving me,
Teenarama, injections in the knee…

This was the rather desperate couplet I wrote for The Records’ song Teenarama a long time ago. A few years back I received an email from one Pat Broderick (USA I think) asking if ‘injections in the knee’ was a euphemism for something he didn’t understand. I replied that it was just a throwaway line that rhymed, but ‘I guess the knee, like the elbow, is not a sensitive part of the body, therefore you wouldn’t really feel it.’

How wrong I was.

Yesterday, several decades after writing said couplet, I did in fact receive an injection in the (left) knee to hopefully address the ‘meniscal tear exacerbating osteoarthritis’ that was revealed by an MRI scan. Too many years operating that kick drum, I told myself. But ouch!

24 hours later and I’m swanning round the gaff like a young man, devoid of the pain I have endured for a year or so, that reached its most intense trudging up and down the steep streets of San Francisco a few months back. But it’s early days – there is no guarantee the pain won’t return and I’m urged by my knee specialist to exercise. And I have friends with far worse health conditions, to whom I send best wishes.

Anyway - by an amazing coincidence – ‘you couldn’t make it up’ - just last night as I was retiring with my new knee, I received a message at my Facebook Will_Birch ‘fan page’ from one Michael Newman (Topeka, Kansas), who couldn’t possibly know the intricacies of my joint pain resolution. Michael asked:

‘Will, can you demystify the line ‘injections in the knee’ for me? I’m guessing you’ve been asked this before.’

Indeed I have, and I replied to another recent enquiry explaining that the lyric to Teenarama (having reflected on the matter) was written from the perspective of an older man – well, pushing 30 at the time - becoming entangled with a younger girl, say around 20, whose sweetly callow, teenage ways were a source of fascination. And that an ‘injection in the knee’ was something more associated with older folk, but I could have been fudging that a bit.

For your amusement only I reproduce the lyrics here, they’re not too deep:

I wanted a holiday, you sure had a lot to say every night
I thought that a younger girl, could show me the world, I was right
Coca-cola, is all you ever drink, the way you smile, the way you wink…

I wanted a change of style, to be with a juvenile for a week
I rented an apartment, then you went and lost the key
Sugar candy is all you ever eat, you’re so skinny, you’re so sweet… 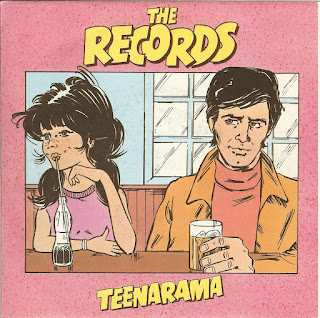 And congratulations to Bob Dylan for winning the Nobel prize in literature.

Email ThisBlogThis!Share to TwitterShare to FacebookShare to Pinterest
Labels: Injections in the knee, Teenarama, The Records